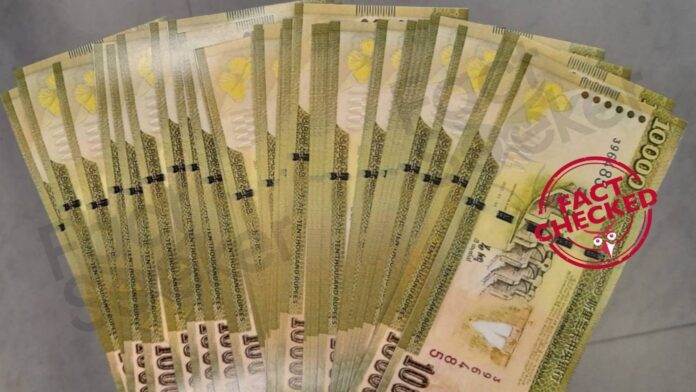 A news with the title “Wang Yi officially handed over new currency to Sri Lanka during a meeting between President and Prime Minister” is currently being circulated with a photo of a stock of Rs. 10,000 notes.

The news item further reads that the People’s Bank of China issued Rs. 10,000 notes on behalf of the Government of Sri Lanka to be used for payments in Sri Lanka and China, Port City, Colombo and Port of Hambantota.

When inquired, a media officer of the Central Bank of Sri Lanka said that the above news item is fake.

She further said that if such money is being laundered or obtained, a press release will be issued and that the media will provide due coverage.

Therefore, the Central Bank of Sri Lanka has confirmed that the statement on the People’s Bank of China issuing Rs. 10,000 notes on behalf of the Government of Sri Lanka is fake. A fake post stating that several helicopters have landed at the Colombo Racecourse is being circulated.

Is this a statement made by Sunil Handunneththi?

Did the President’s media division issue a statement saying increasing the price of buns is a step to boost local economy?

Is China to get the revenue from the boarding of Ever Ace Ship?

Are American aeroplanes banned from landing in Sri Lanka?