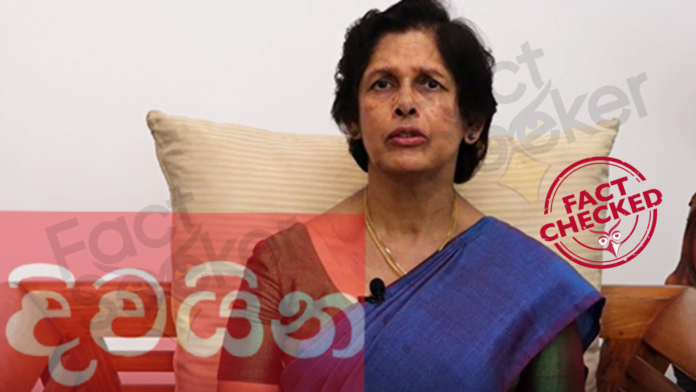 The Divaina newspaper had reported a news item titled “The Omicron variant cannot be controlled by vaccination.” on the 3rd of December. According to the report, Dr. Padma Gunaratne, President of the Ceylon Medical Association and a specialist in neurology, declared in a media briefing in Colombo on December 2nd that the Omicron variant could not be controlled by vaccines. During our fact investigation, it was revealed that the specialist Dr. Padma Gunaratne had not made such a statement at the press conference.

The media briefing was uploaded on the official Facebook page of the Sri Lanka Medical Association, where she has stated that more attention should be paid to vaccination and that the booster vaccine should be given as soon as possible.

Moreover, she said that the adults over the age of 60 years and those with low immunity should especially get the booster vaccine.

We contacted the specialist Dr. Padma Gunaratne to inquire about the above news and she said that she had not made a particular statement in the news item published on that day.

Therefore, it is confirmed that the specialist Dr. Padma Gunaratne did not say that the Omicron variant cannot be controlled by vaccination.