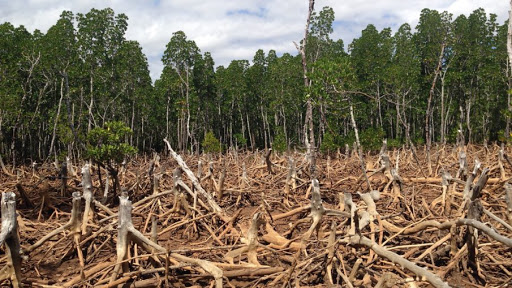 Deforestation: Will Sri Lanka be another Nigeria in the future?

The term “Deforestation” has numerous definitions by different scholars and organizations. Generally, it can be defined as forests which have been cut down, burnt and/ or the land being cleared of trees in order to fulfill human needs. Hence, it is a negative impact for the diminishing forest cover in the world which is a global threat in many ways.

In recent times, the public has paid a lot of attention to deforestation in Sri Lanka. A recent focus of discussion about Wilpattu National Park in 2019 comes to mind. Deforestation in Wanathawillu, Anawilundawa and Sinharaja were also focus areas. Complaints regarding deforestation and developmental projects have been reported from several parts of the country. It is believed by the public that there are certain political figures behind these illegal actions. The rising question is “Who should be blamed for this issue? Is it particularly the relevant authorities?”

Implementation of mega development projects such as highway constructions and sustainable projects have been a principal reason for cutting down of trees and clearing up of forest land areas in Sri Lanka. Furthermore, the forests in Sri Lanka have been removed for agriculture, plantations and to provide fuel and timber which are a part of the national economy. It has been a major issue not only for human beings, but also includes the drastic loss of wild animal habitats. Besides, deforestation has caused huge environmental issues such as flooding and soil erosion which are primary threats to the biodiversity of Sri Lanka.

The forest cover in Sri Lanka in 2019 was reported to be 16.5 percent, down from 29.7 percent in 2017. Between 1990 and 2000, Sri Lanka lost an average of 26,800 hectares of forest per year, which amounts to an average annual deforestation rate of 1.14 percent. In total, between 1990 and 2005, Sri Lanka has lost 17.7 percent of its forest cover. This is a significant loss… Sri Lanka is considered to be a key biodiversity hotspot in the world, and specifically the highest biodiversity per unit area in Asia. If deforestation continues, the unique biodiversity will be destroyed and there is no doubt that human lives will be at an even higher risk.

According to the records of Global Forest watch, Sri Lanka had 3.53 Mha of natural forest, extending over 54% of its land area. However, in 2020 it lost a further 11.2 kha of natural forest. From 2001 to 2019, 28% of tree cover loss occurred in areas where the dominant drivers of loss resulted in deforestation as shown in the graph below. 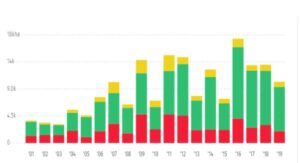 Moreover, the following records show the top 7 regions which were responsible for 53% of tree cover loss between 2001 and 2020. Anuradhapura was among the top of the list with 29.9 kha, compared to an average of 7.54 kha in other areas.

When considering the number of complaints received about deforestation up to May 2021, it is significant that the alerts are at a normal level when paying attention to the following graph. However, it is remarkable that it has become a normal process in receiving complaints regarding this tragedy from people all over the country, although government officials turn a blind eye to deforestation. It is regrettable that society is helpless here.

The Sinharaja Forest Reserve was established in 1978 in order to conserve the extinct tropical lowland rain forest, and also was flagged as a World Heritage Site in 1988. It contains more than 60% of rare, regional trees. It is also a habitat to 50% of Sri Lanka’s endemic animals. The topic of deforestation in Sinharaja has been under discussion throughout these years. Nevertheless, the administration as well as public officers who are investigating the issue are unable to figure out the right laws to help protect Mother Nature. Former president Maithripala Sirisena signed a gazette on 11th November 2019 to expand the Sinharaja rain forest into 36, 474.93 hectares which can be identified as a radical step taken by him. He stated that “I expanded the Sinharaja forest which was limited to 11,000 hectares by 36,474.93 hectares. This decision is a decision taken by me for living in the holy motherland and for the existence of humans, animals, and the nature of the whole world“.

In recent times, a great controversy happened with the emotional statement of the teenage girl Bhagya Abhayaratne from Rakwana on Sirasa TV that she witnessed Sinharaja being destroyed everyday which resulted in focusing on a number of buried issues. The major theme of her statement was that government officials are turning a blind eye upon the clearing up of forest and tree felling around her village. The villagers’ belief is that a hotel is being constructed without the permission. Nishantha Edirisinha, a senior official from the Forest Department, pointed out that the Sinharaja Core World Heritage wilderness area is almost 4 km away from the site. According to him, this is private land which has been cleared and developed for three private houses. He stated that this area is not protected under the law nor declared an elephant corridor. Private land holdings and developments are governed by regulations applicable anywhere in the country. If these accusations related to deforestation and environmental damage are proven to be true, it can be concluded that the Government seems to be moving towards a self-destructing fatality. Cutting down forests in one area and planting trees in another area is not a proper solution to protect the environment. An existing biodiversity, once destroyed by cutting down forests, will be destroyed forever, and planting trees elsewhere will not give rise to biodiversity within a short period. It is the avarice of several human figures in one way, which has resulted in destroying a priceless treasure like Sinharaja.

A Planet Without Oxygen

Earth’s O2-rich atmosphere, unique among known planets, has played an essential role between life and the environment. The COVID-19 pandemic is the best example which highlights the need for oxygen these days. Latest reports mention that people are in need of oxygen due to shortness of breath. However, oxygen facilities are running out. These instances prove that deforestation contributes to these fatalities. At this point, it is important to consider the value of oxygen which is a byproduct that is in nature that in turn allows us to breathe freely. The following statistics, from the 2 Degrees Institute estimate the decrease in global Oxygen levels from 1995 to 2020. It is evident that the issue of oxygen is not limited to Sri Lanka, but to the entire world. 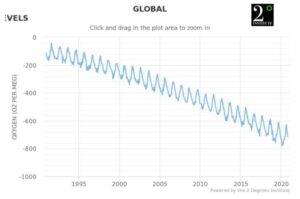 When this severe loss is visible, the question which arises is whether the measures taken by the relevant authorities are effective because the protection of nature cannot be identified with the actions of people. It is noticeable that the young generation is less interested in forest protection when compared with the middle-aged. All of these actions call into question what the future of Sri Lanka will be like. Even the responsible do not take necessary steps. It is a threat as well as a futile act done against nature because human beings and animals depend on it.

Although laws and regulations have been enacted in recent times to address most of these issues, the relevant agencies have not adequately consulted during major development initiatives. When there is credible evidence that unauthorized deforestation is happening, it is a sin and a crime against future generations. Furthermore, this proves that environmental laws and human rights laws are not applicable in the present. It is the time to educate the authorities as well as the public about the value of forest preservation in Sri Lanka and to specifically point out the areas where the environmental law needs to be improved. If justice is equalized for everyone this destruction will be ended which will be a benefit to the community as well as the environment.