0
(0)
A post is being shared on social media stating that the former JVP MP Nihal Galappaththi has sold his car and donated Rs. 2.5 million for the construction of the Lankagama Bridge that was recently vested with the public. 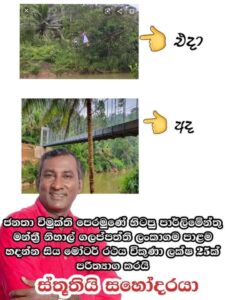 The bridge opened for the public on the 10th of April, was constructed with the contribution of the Navy and it connects the villages of Lankagama and Nilwella in the Galle District.
When inquired by JVP Media Correspondent, Upul Ranjan, he stated that there is no truth to this news and that it was completely untrue. He further stated that Nihal Galappaththi has not made any donation for the construction of the so-called bridge.

Satirically manipulated photos of MPs of the opposition party