0
(0)
News circulates on social media stating that Siddhika Senaratne, the Director-General of the Sri Lanka Standards Institution (SLSI) has given a statement during an interview to the Dharani newspaper on 14.04.2021 reading, “I do what the President tells me. I am against food poisoning”.
Fake Photo 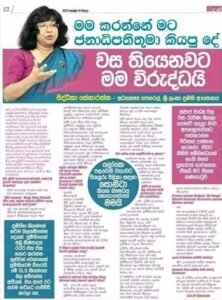 A technical investigation into the above news revealed that the newspaper headline from Dharani newspaper on 14.04.2021 reading, “Not a milligram, I’m against even one decimal of food poisoning”, has been distorted and published as a statement by Ms Siddhika.
Accordingly, the news spread on social media that Ms Siddhika Senaratne had made a statement to the Dharani newspaper saying, “I do what the President tells me. I am against food poisoning”, confirms that the news being spread on social media is false.
Real Photo 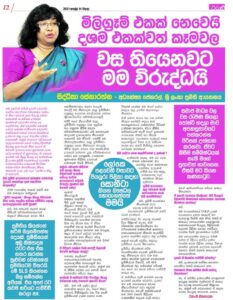 A false statement is shared regarding the COVID-19 vaccine

Satirically manipulated photos of MPs of the opposition party